As director of the Powell Gene Therapy Center, the associate chair of pediatrics and the Earl and Christy Powell University Chair in Genetics at the University of Florida, Byrne has made significant contributions to the understanding and treatment of Pompe disease, Canavan disease and GM-1 gangliosidosis. He was recently honored for his work in gene therapy with the “See The Light” Award from the Mathew Forbes Romer Foundation, which supports the UF Powell Gene Therapy Center in developing gene therapies for fatal brain diseases.

“It’s rewarding to be recognized by a patient organization, since our efforts always put patients first,” Byrne says. “The opportunity for gene therapy to transform the life of a patient with a genetically defined disease is unique. In the history of medicine, there have been very few treatments of any disease that can effectively be called curative. In some circumstances, this will be possible with gene therapy. It’s rewarding to be able to provide such a treatment to patients.” 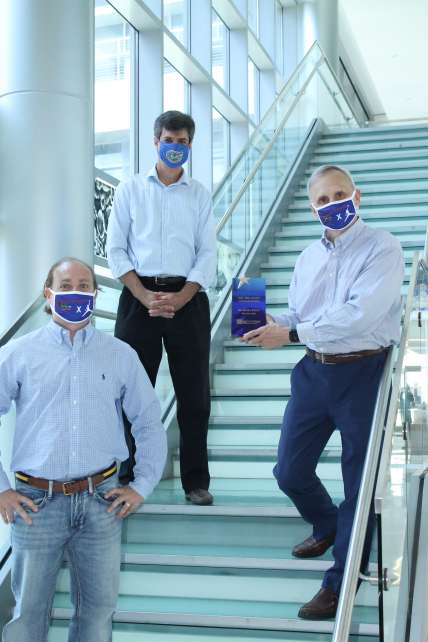 Established in 1998, the South Florida-based Mathew Forbes Romer Foundation has raised more than $2.2 million for projects at UF and other institutions that research treatments and cures for fatal pediatric genetic diseases. Funds also support programs for education and genetic screening.

Kevin Romer, president of the foundation, presented Byrne with the award during a physically distanced ceremony Sept. 23 at the UF College of Medicine. He says Byrne was chosen as a recipient of the award for his past achievements and the current challenges he’s tackling — namely the development of a lifesaving gene therapy cure for TECPR2, a rare, fatal neurodegenerative genetic disease found in 5-year-old Jordan Avi Ogman of South Florida.

“We are recognizing Dr. Byrne’s determination to save Jordan by rapidly developing a new gene therapy, along with his pioneering efforts with AAV gene therapy vectors since the 1990s and the collaborations he has led with world experts to ensure safety, efficacy and manufacturability of gene therapy for so many other fatal diseases of the brain,” Romer says.

Jordan’s father, David Ogman, says Byrne’s research gives his family hope after his son was diagnosed with a neurodegenerative disease caused by a mutation of a gene never before known to cause disease in children. Those who face a diagnosis of TECPR2 are told their life expectancy is unknown. But, with Byrne’s help, Ogman believes a change may come.

“Dr. Byrne told us it’s his obligation to save Jordan,” says Ogman, who received a bachelor’s degree in business from UF and whose wife, Stacey, is a graduate of the UF Levin College of Law. “We immediately bonded, and I consider him a member of the family. My relationship with Dr. Byrne will last a lifetime, as I plan to continue the fight against pediatric genetic diseases of the brain until we cure and eradicate these diseases so that no kid will ever suffer from such a debilitating disease like Jordan is.”

Visit the UF Foundation website to learn more about Byrne’s work with TECPR2 and to support the Jordan Ogman TECPR2 Research and Development Fund.